Languages have a pre-defined structure or set of rules that's called a grammar. You might remember grammar from those long workbooks you had to complete in elementary school. In languages, including English, there are rules for how a sentence is formed. For native speakers we take this for granted, but we'll typically notice right away if something is malformed:

The second sentence isn't grammatically correct because it doesn't follow "Subject-Verb-Object". Native speakers intuitively know this, even if they can’t express why.

Languages have a lot of implied information packed into a grammar. English has paragraphs, sentences, verbs, tenses, subjects, and much more. Yet, when you read “Mary loves cats” none of that information is explicitly provided. It's a shared understanding.

In fact, if we had to explicitly provide contextual grammar information, we'd never get anywhere. It'd take forever to have a conversation.

As a speaker or writer you never have to articulate the grammar, but it’s what conveys the semantic meaning of your communication. A seemingly simple rule like Subject-Verb-Object lets us know who the sentence is about, and where the action is directed.

When we read "Mary loves cats" we know that Mary is the subject doing the loving, the verb. The thing that she loves is cats. The object.

Teaching this to computers is hard, though. And what happens if we want to transform the sentence to replace the subject, "cat", with "dog"?

The first approach we might take is to replace cats with a regex. This works, to an extent. "Mary loves cats".replace(/cat/, 'dog'). We'll get the desired output: "Mary loves dogs".

However, what happens when "cat" is elsewhere in the sentence but not the subject? With a compiler we don't typically have much control over the input. So, let's say someone writes a different sentence that contains the word "cat".

It's raining cats and dogs.

With the same string processing being applied, we'd end up with "It's raining dogs and dogs" which doesn't make sense.

For our desired transformation we need to only target the object in a sentence. So, we need to unpack the different parts into something we can work with, something machines can understand.

The grammar rules of a language can be used to break up a statement into discrete parts. This is called tokenization, which we’ll dive into later. Once a language is broken up into its parts, we can represent it as a tree structure. 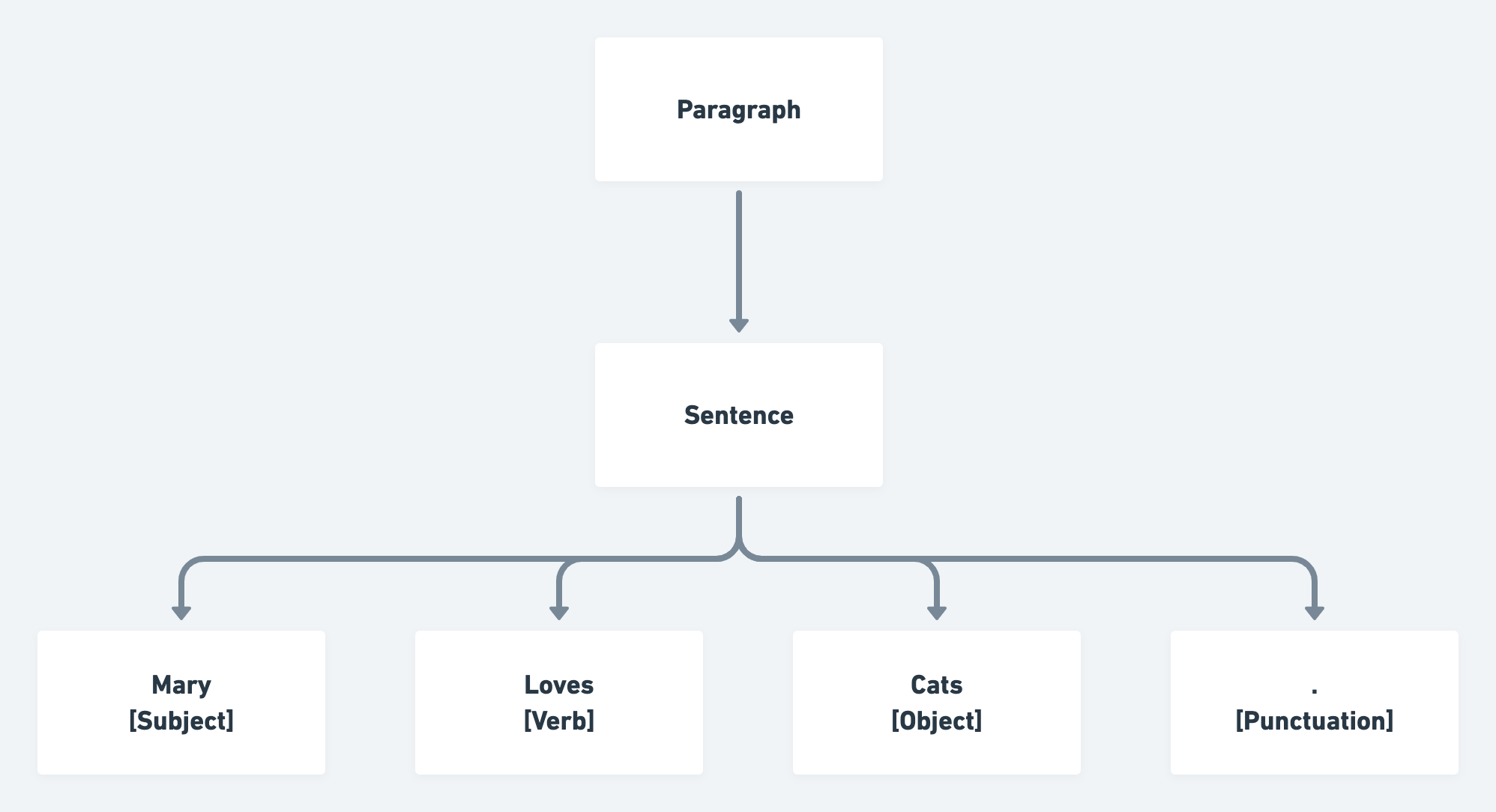 The Computer Science-y term for this representation of language is Abstract Syntax Tree, or AST. This tree representation is a key piece of a compiler and is the result of the parsing phase. It gives us something easier to work with when we want to transform "cat" to "dog".

If this tree was a JavaScript object we could visit every sentence and look for nodes of type "object" and then check their value. This "search" that happens in an AST is called visiting and is conducted by a visitor which we'll get into later.

For now, we can summarize visitors as a way to walk through the nodes in our tree.

The code for our cats to dogs transform would look something like the following:

The AST is a powerful way to work with language. It's a more abstract representation of our original sentence that lets us be more intentional, and explicit, with our transforms.

We can now rapidly use this same approach to change "loves" to "adores".

The transforms we've now performed on our AST are pretty neat, but they're also relatively straightforward. If you were very good with regex you could probably avoid using an AST. Though, your code would be brittle and difficult to change and debug.

The regex approach begins to break down when we imagine a more complex scenario. What if we wanted to remove all negative sentences in a paragraph?

ASTs can work for all languages, not just English.

This is why a compiler parses code and creates a tree structure based on the rules of a grammar. The AST allows for compilers to transform your source language to a target language, which could mean machine code or ES5 JavaScript.

As we continue diving into the different parts of a compiler you'll get intimately familiar with the Abstract Syntax Tree. It's the internal representation of a compiler's input, and is a key data structure for plugin-based web compilers like unified, Babel, and PostCSS.

If you're interested in learning more about compilers and ASTs, checkout out the course I'm working on, Compilers for Humans →